Would you like to switch to the accessible version of this site?

Don't need the accessible version of this site?

Mandela, Queen of the Castle

Mandela, Queen of the Castle 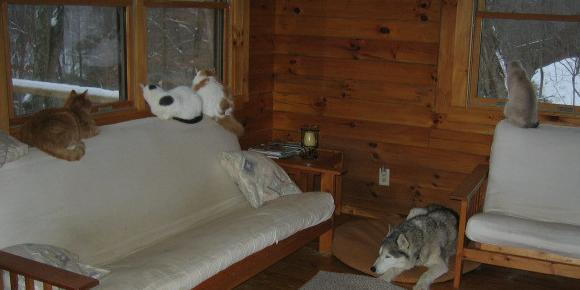 Mandela was the first animal that ever lived with me.  At least, that is what she proclaimed.   She asserted it to two big Siberian huskies.  She declared it forcibly to five felines.  She affirmed it to many other cats and dogs over many years.

The problem was, it wasn’t true.

Mandela was a white-and-grey cat living under a parking-lot dumpster with her litter of kittens.  Despite being malnourished and having injuries from being hit by a car, she kept her kittens well-fed and protected.

A rescue group brought her to the veterinary clinic where I practiced at the time.  We tended to her wounds and found homes for her kittens.  But it seemed no one was interested in adopting an average-looking, nothing-special, adult cat.  So she sat in a cage day after day.  The days turned to weeks.  The weeks stretched into months.  A year would soon pass.  The rescue group paid the clinic to house her because they had no empty cages of their own.

At the time, I was living in my parent’s loft while my new house was being built.  I vowed that if by the time my house was complete, no one had adopted that poor white-and-grey cat, I would take her home.

My house was nearing completion, needing only a final coat of stain on the logs.  So, I brought Mandela to her new home.  It was furnished with a mattress on the floor, a folding camp chair, and a litter pan.  It was her castle.  She was its queen.

Mandela and I lived there until I finished staining the logs.  Eventually, the time came to move my other cats and dogs from my parent’s home into the new house.   Several cats, Spider, Sutekh, Fox, Willie, and Stryker, had lived with me for many years.  Thus, it was a curiosity to them when this white-and-grey interloper swatted them in the face and hissed at their very existence.  The huskies, Psy and Mysti, could not reconcile how a lowly feline was suddenly the pack leader when they had been for the previous decade.

Still, Mandela steadfastly proclaimed to each new arrival she was the “first and most beloved” among them.

The others mused at her misconception, but they seemed content to let her rule.  Perhaps they understood that while they had lived lives of love and freedom, she lived in a 2'x2' metal cage with only an occasional chance to roam the cat ward and receive a cursory pat on the head.

Whatever they understood, they didn’t retaliate when she lashed out with a strong paw or glared in disgust at their presence.

Mandela ruled the castle for twelve years.  During that time, Spider, Sutekh, Fox, Stryker, Willie, Psy, and Mysti would all pass away.  Each leaving after long and wonderful lives.  Over the years, Mandela would “welcome” Phoenix, Sputnik, Squirt, Marvin The Martian, Rusty, and Reggie into the fold.  She greeted each newcomer with chatter, a sideways glare, and a swat with a paw.  Nevertheless, she allowed them into her home.

Mandela was the Speaker of the House.  Each day when I returned from work, she bolted down the steps to the driveway, telling me of her exploits and reporting on what everyone else had been up to.   When away on vacation, I’d return home to an extended diatribe from Mandela as she recited her manifesto and reasons why I shouldn’t leave again.

She missed me.  Of all the animals living in the house, Mandela was the one who cared the most that I had been gone.  She couldn’t wait for me to climb the steps from the driveway to the front door (granted, there are 53 of them), instead, she rushed down meowing all the way.

Every night without exception, she waited expectantly as I raised the covers for her.  She snuggled up tight to my chest, using my arm as her pillow.  As I turned in my sleep, I’d wake to find her still tight against me.

For twelve years, she made certain I knew I was loved.  I was first and most beloved to her.  Just as she was sure she was to me.  I discovered the truth of her conviction on the day she died.

It was a summer day when Mandela curled up on her favorite chair, covered her eyes with her paw as she often did, and fell asleep.  It was a sleep from which she would never awake. Her pain was over, but mine was just beginning.

I’d felt pain at losing cats and dogs before, but there was something alien about this.  There were the familiar feelings of loss, loneliness, and emptiness that threaten to never subside.  Death brought with it the usual unanswered question of how the living dare go on when what they need is no longer present?  As always, the loss of a companion unsettled my existence.

So what was different about losing Mandela?  What was compounding my torment?

I sat beside Mandela’s lifeless body overwhelmed with the grief.  It struck me in that moment, I’d just lost someone who loved me.  Perhaps I’m an obtuse fool to have never felt that before.  I’d always mourned because I lost someone I loved.   I was just rocketed into a universe where I understood that real pain isn’t losing one you love, it’s losing one who loves you.

I still fall into uncontrolled tears when I think of that day.  I had made nearly fifty trips around the sun before I realized the anguish of losing someone who loved me.  Was I lucky? or pathetic?  I don’t know.  But I live life differently now.  I make certain the cats and dogs with whom I now share this castle know they are cherished.  I love them the way Mandela loved me:  To the abyss of the deep; To the infinite ends of spacetime; In a rush up the steps because I can’t wait to get to them and hear about their adventures.

Am I “first and most beloved?”  Marvin curls up tight to my chest every night to assure me I am.  Phoenix licks my hand endlessly that I might know it to be true.  Reggie bounces and sings until it resonates to my core.

Yes, I am first and most beloved.  And so are they.

Thank you, Mandela, for the joy, the memories, the tears, and a lesson I was loath to learn.

We look forward to hearing from you

Find us on the map